And Snake’s having a rest, and I’ve replaced him with Frantic Wolf, a prisoner I rescued a while back. Badass lady!

MGSV is a remarkable game. It’s light on the nonsensical story, which is usually half the reason to buy a Metal Gear Solid game in the first place, but it instead gives you these gigantic sandboxes to wreak havoc in. My favourite tactic is to go in sneaky with my tranquilizer pistol, then if things get hairy? Silenced assault rifle and a rocket launcher. Boom.

Things tend to get hairy now that the enemies seem to all be wearing helmets. Bastards.

I love games that are open world. Skyrim, Oblivion, Fallout, World of Warcraft, Final Fantasy XIV, GTA and now MGS. There are some aspects of the game I’m not a huge fan of (Quiet’s an AWESOME character, but her skimpiness and the loose, silly reason for it are a bit of an err, especially when you unlock an outfit for her that COVERS HER UP. Kojima, just admit you wanted sexy T&A, it’s fine, we’ve had the cameras rolling over Snake’s sculpted ass for years and it was fine then), but the game as a whole is just an abolute masterpiece.

I’m very excited for R. Mika. She was one of my favourites from Alpha 3, and her return is a massive source of happiness for me.

One of my other favourites has been announced today too, Karin!

She’s looking grown up! She looks all business like, and of course the OHOHOHO laugh is back. Her older appearance gives me hope that we’ll see a Sakura who’s dressed appropriately for her age (i.e. not in school uniform. Unless her story is that she’s abominably stupid and has been held back until her mid 20’s?), and means the game itself is slightly less of a sausage-fest.

Not that I’m opposed to sausage-fests, per se, but I do like badass ladies in my fighting games too.

Any Legion news yet? Nope? Okay then.

I get that they’re probably waiting for Blizzcon, but leaving 3 months between the reveal and follow-up information risks people just not caring when the news actually DOES roll in.

I’m dangerously close to that precipice. I have MGSV, FFXIV and various other games to play, Disgaea 5 and Street Fighter V to look forward to. I don’t foresee me doing much in WoW bar Thursday raiding for the foreseeable, and having nothing to look forward to bar minimal details from Gamescom (that may not even feature in Legion, let’s be honest, because it’s sometimes easy to confuse ambition with ability; just look at how garrisons turned out, look at the lack of Path of the Titans, dance studio, or even the Abyssal Maw instance which would have resolved the Neptulon storyline) isn’t giving me much hope.

I still love my Pandaren though. They are amazing. They may be the only thing keeping me there, frankly.

I’ve hit level 46, I have no more storyline quests until I hit level 49, so I’d better bugger off and grind some levequests and FATEs. 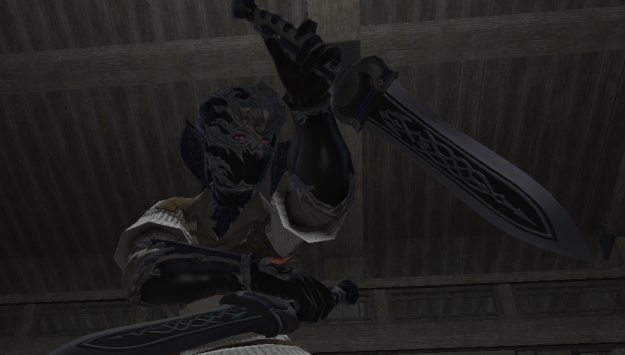 Got me some ninja-specific gear though, so that’s nice.