Bear in mind this is stuff that can change between now and when Warlords is released, so take it with a pinch of salt!

So according to some sort of press day Blizzard had on Thursday, our talents are largely unchanged from what we saw at Blizzcon, but I wanna focus on Chaotic Resources, particularly because we have a screenshot of the tooltip for it! I wanna focus on the Destruction part of it, as I rarely play Demonology or Affliction. 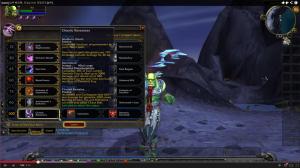 The Destro part is a change from the old version at Blizzcon, where you dealt 25% of your normal damage with Incinerate and Conflagrate, but generated quadruple the embers. Now, it’s 40% for triple the embers, and your Fire & Brimstone ability will also affect Chaos Bolt.

You hear that? AOE CHAOS BOLT?!

This is interesting, as the old version of the talent seemed to be very much focused on single target, as in AoE situations, you’d do next to no damage due to the talent reducing the damage of your main AoE spells, and Fire & Brimstone reducing them further. With the talent as it stands, it gives us an AoE option! Now, you’ll build a few embers, and throw them out to cast AoE Chaos Bolts.

Do bear in mind that Fire & Brimstone carries a damage reduction of spells it modifies, so (to use today’s stat numbers), you’re not gonna see 10 Chaos Bolts hit for 2m each. My Fire & Brimstone reduces damage to 71.57%
of its normal, so each one would hit for about 1.4m. Still a hefty amount of damage!

But let’s assume your incinerates hit for 100k normally. With the talent, they’d normally deal 40k damage (while generating triple embers), and with F&B on top of that they’d do about 28k. I assume then that in an AoE situation you’d Incinerate until you hit 2 embers, then AoE your Chaos Bolts for some AoE bursty times.

In a single target situation, you’ll most likely do as you do now, but Chaos Bolting more frequently due to the increased ember generation.

Well, that’s me excited about the next expansion! Boom, Chaos Bolt!